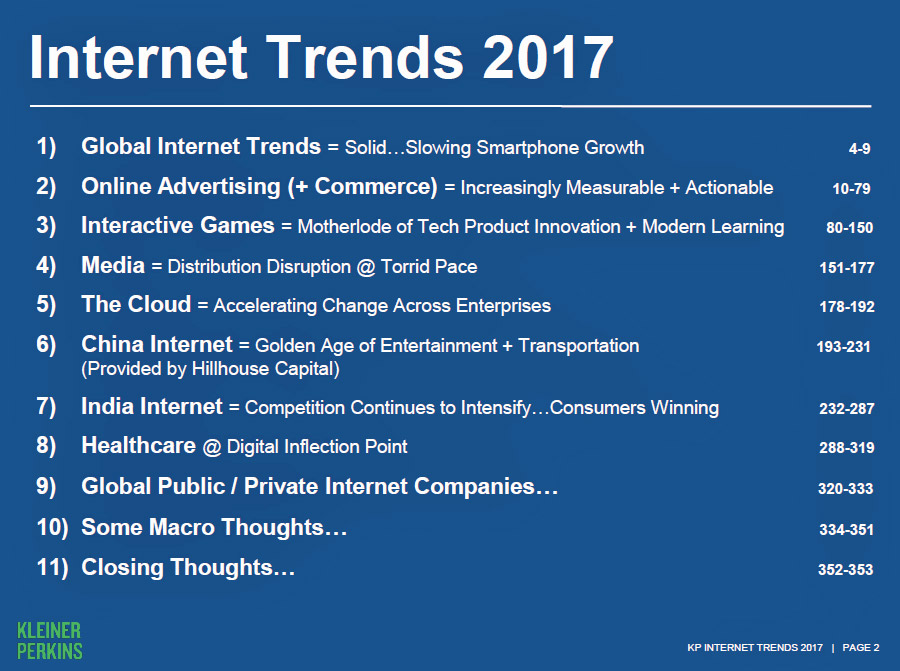 As with previous editions, the 2017 report offers credible insights into some of the significant trends that are shaping, evolving and defining the internet and our use of it. This year, there’s a strong focus on online advertising, interactive games, healthcare, and much more.

Weighing in at 355 slides, the presentation deck PDF is a hefty opus with much to glean and digest. I’ve zeroed-in on some metrics that offer insights of particular interest to communicators like me. Following my narrative, in which I note the numbers of the specific slides that I’m highlighting, I’ve embedded Meeker’s deck so you can view or download all those slides right here.

While many of the specific examples I’ve highlighted are from experiences in the USA, it’s fair to consider them as broad trend indicators and pointers that would also be indicative for other markets such as the UK, continental Europe and further afield. Indeed, the report goes into some detail on trends in two specific countries – India and China.

2. Global smartphone shipments continue to slow dramatically: just 3% growth in 2016 compared to 70+% in 2010. Android remains the dominant mobile OS at over 80% with Apple’s iOS less than 20%. ‘Other’ (including Windows Phone, Blackberry) continue diminishing year on year. (Slide 7) 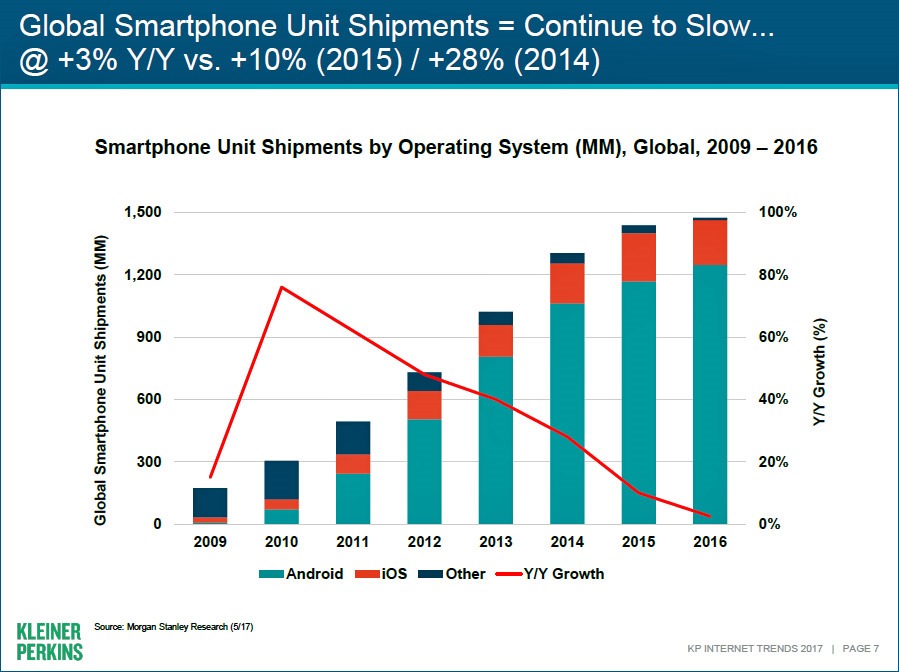 3. Online advertising will exceed television advertising on a global level in 2017. (Slide 14)

4. Google and Facebook together accounted for 85% of total online advertising revenue growth between 2015 and 2016. (Slide 15)

5. ‘Engagement’ is the prime metric used to measure success for 56% of social advertisers. But measuring actual ROI is the prime challenge for 61% of advertisers in social media marketing. (Slide 17) 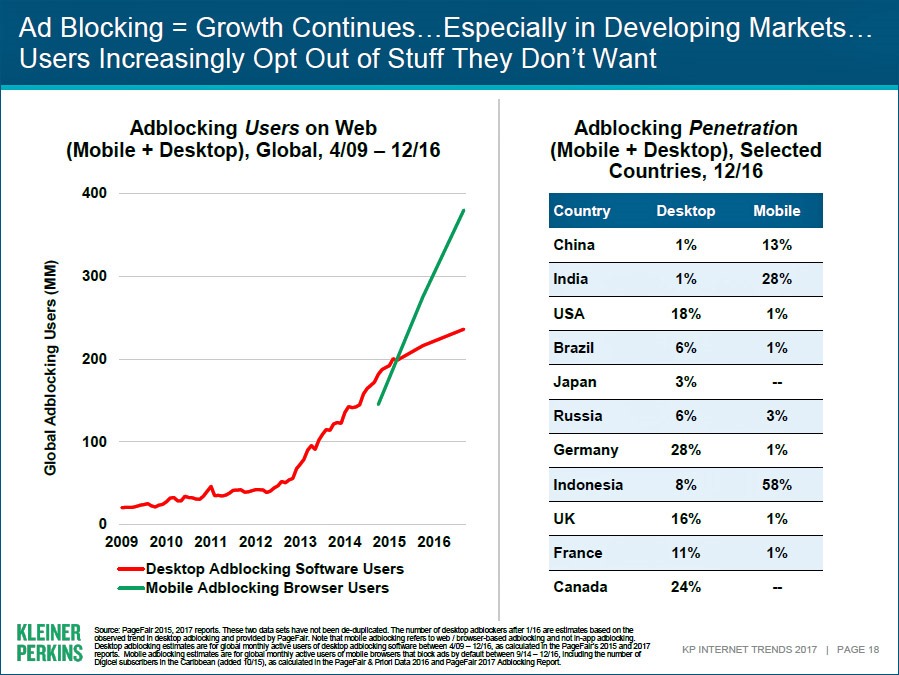 7. Images and voice can replace typing words in online search, especially with the advent of voice-activated consumer technologies such as Amazon Echo. (Slide 43, 46, 47) 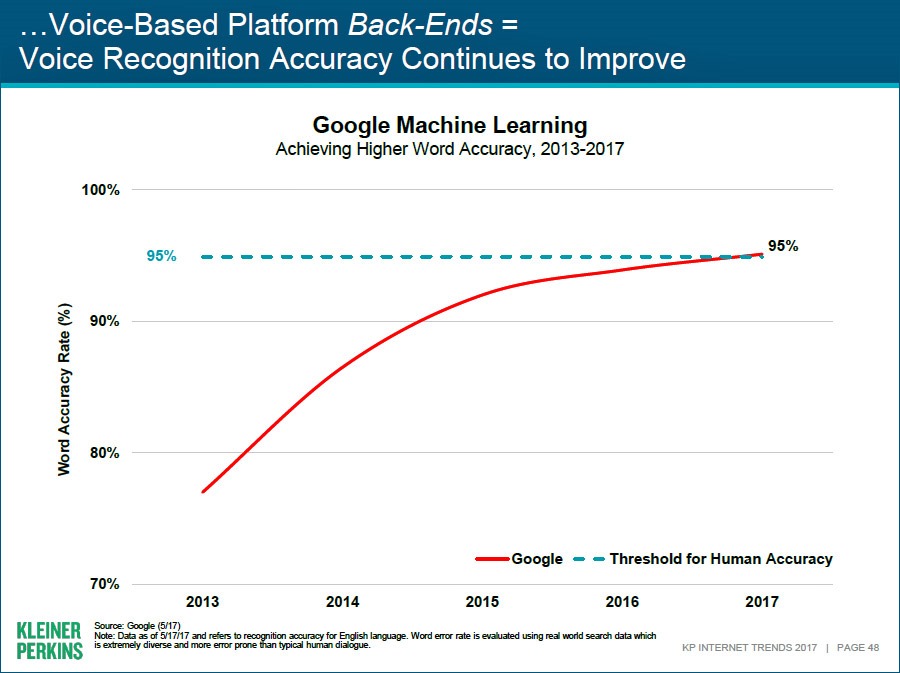 9. Social media can drive accountability: in 2016, 82% of customers stopped doing business with a company after a bad experience, up from 76% in 2014 – and talked about it on social networks. (Slide 54) 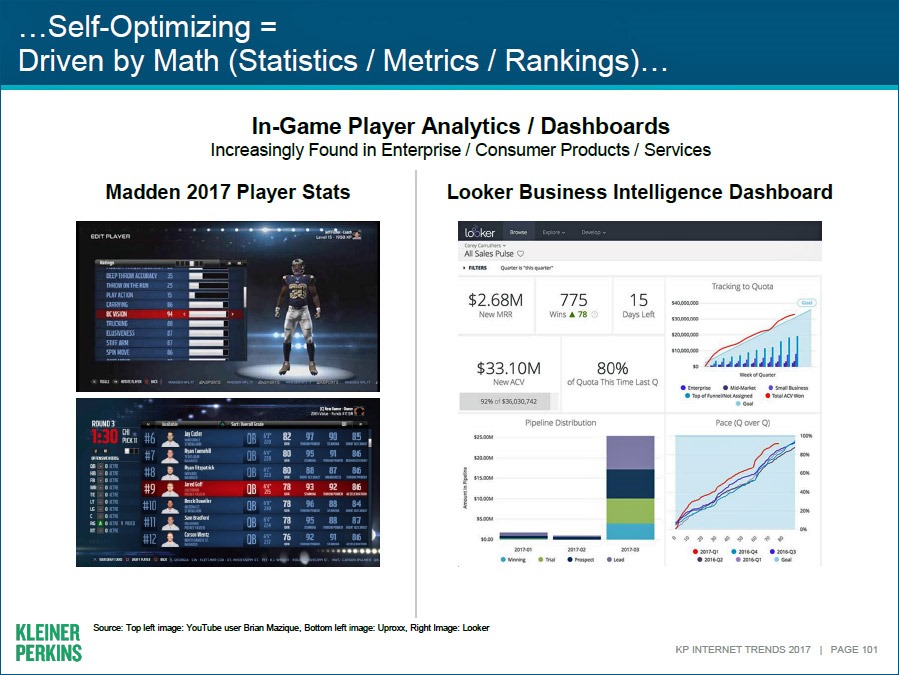 14. Video gaming is the most engaging form of social media with social networks Facebook, Snapchat and Instagram three of the top five platforms, each of them strong on mobile. It’s notable that Facebook owns Instagram, giving Facebook a commanding overall position in 2017. (Slide 114)

15. Gaming platforms are evolving at high speed to build ever more immersive virtual worlds. Second Life was way ahead of its time. (Slide 135)

16. Netflix streaming: from zero to 30% of US home entertainment revenue in just ten years. (Slide 162) 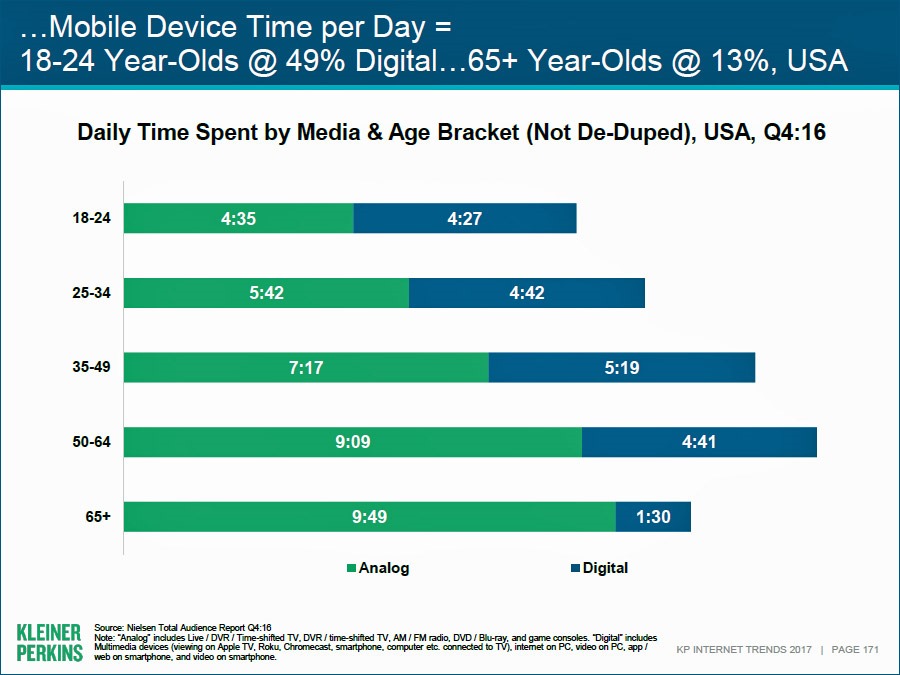 18. With enterprise software, employees expect products to be as well designed, easy to use and as reliable as consumer applications. (Slide 187)

There is a great deal more insights to glean from all the 355 slides in Mary Meeker’s Internet Report 2017. You may have different focuses than those I’ve illustrated here.

Either way, the picture we can see from such trends will help inform our opinions and the plans we make for our own places in this rapidly-changing landscape.