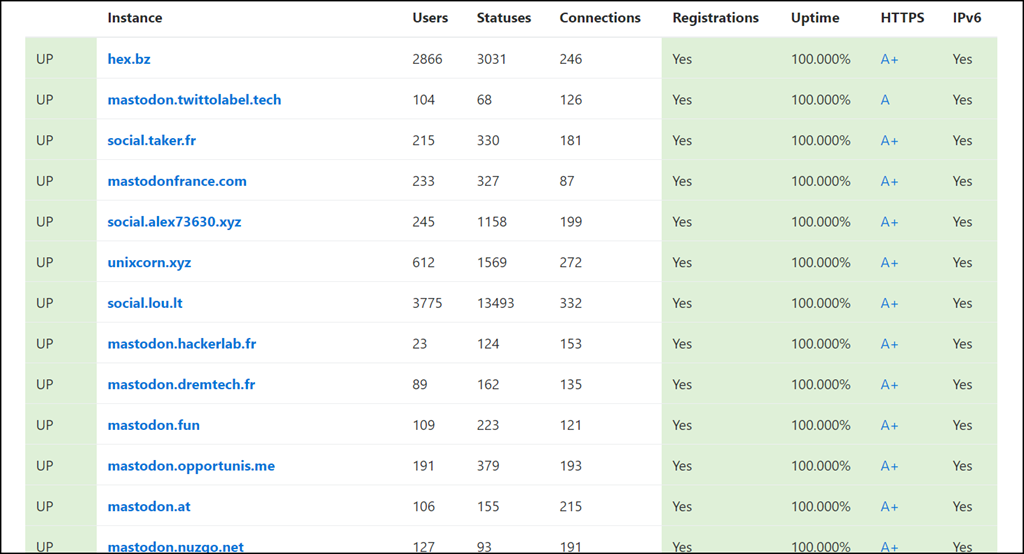 A new social network started up six months ago and began picking up speed last week as it echoes the early days of Twitter. It’s called Mastodon and was born out of frustration with changes being made on Twitter, according to an interview with founder Eugen Rochko in The Verge.

Last year, after Twitter began moving away from a purely chronological feed, Rochko began building the back end for what would become Mastodon. Instead of building a unified service, Rochko envisioned something more like email, or RSS: a distributed system that lets you send public messages to anyone who follows you on the service. Anyone can create a server and host their own instance of Mastodon, and Mastodon works in the background to connect them.

The idea of a federated social network like Mastodon is a huge difference to the business-focused philosophy behind today’s Twitter, something that Rochko explains further in a post on his blog:

Another fundamental difference is that unlike Twitter, Mastodon is free, open-source software. You might think that unimportant, but I think differences between ethical design oriented towards users and design oriented towards revenue are becoming more apparent. The “free” in “free software” stands for freedom of the user, not for the value of money it costs (which only coincidentally is zero in most cases). Mastodon isn’t built for selling your eyeballs or analytics to advertisers. Allowing anyone to inspect its code and submit improvements means that it’s built for people, by people, under the scrutiny of people.

And the federated concept means there is no single, central place you go to and sign up for an account. Instead, you look for an “instance” – a site that’s a member of the federation, sharing its ideals, yet is independent of it, too – that lets you become a member.

I signed up to Mastodon a few days ago with the handle @jangles (exactly the same as my Twitter handle @jangles which I’ve had since I signed up for Twitter in December 2006). But instead of an account at the Mastodon flagship site mastodon.social (it’s currently not accepting new signups), I joined Mastodon at octodon.social, a federated site hosted on a server in France.

So my Mastodon handle address is https://octodon.social/@jangles

Once you understand a little of the federated concept, it’s not too hard to jump in and sign up to Mastodon via an instance – see the list of instances to choose from. You can set up your own instance if you feel so inclined.

Mastodon is a free, open-source social network. A decentralized alternative to commercial platforms, it avoids the risks of a single company monopolizing your communication. Pick a server that you trust — whichever you choose, you can interact with everyone else. Anyone can run their own Mastodon instance and participate in the social network seamlessly.

That’s not far off 300 percent growth in just two days.

But, I wouldn’t place too much significance in such numbers or increases if a broad goal of Mastodon isn’t about user numbers but more about user experiences. The numbers are consequential.

Plus if you look at the instances page, you’ll notice a fair number of them suffering downtimes that doesn’t bode well for their long term survival as this service scales.

Will it scale? That’s a good question in a federated system that doesn’t have a centralized platform or infrastructure. Yet isn’t this how Twitter started back in 2006? Not the federated system but the technical problems facing a new service and the growing pains of scale as more people discovered it, liked what they saw and started signing up and using it?

Remember the many fail whales signifying a technical problem that were almost a constant in Twitter’s early (pre-2010) years? Mastodon has its equivalent – not a whale but (you guessed it) a mastodon. 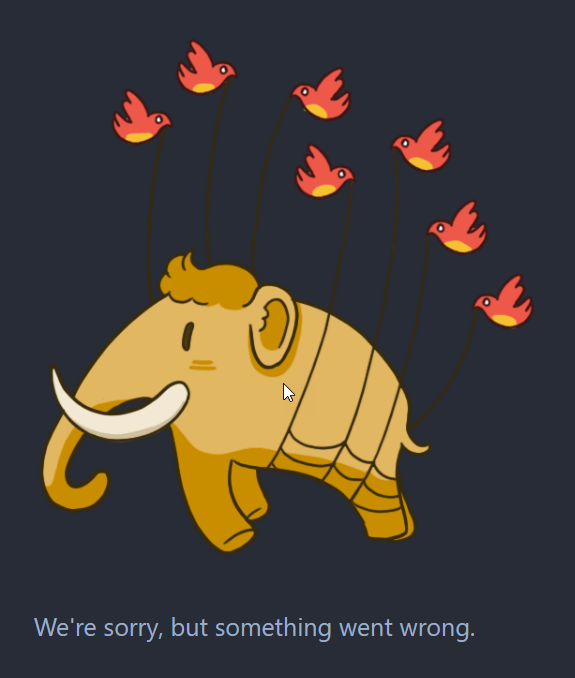 I’ve already experienced quite a few of these.

And if you were an early adopter of Twitter-like social networks in the mid-2000s – Jaiku, identi.ca, FriendFeed, for example – you’ll know what that’s like.

On the Experience Journey

Many people are making many comparisons of Mastodon with Twitter, some even referring to Mastodon as a “Twitter killer.”

Hardly and certainly not yet. This is very early days. It’s a time for early adopters and explorers. This is not yet ready for prime time.

It’s also not a place for businesses and brands if they behave as many do today on Twitter which is filled with unsolicited marketing messages and sales pitches.

Much has changed in the 11 years since Twitter began in that some very specific conditions are in place to guide behaviours on and use of Mastodon, such as:

And Nazis are definitely not welcome.

Not only that, other conditions seem right for Mastodon from the get go that makes it stand out from Twitter and its early competitors: APIs to make content-sharing and application development pretty seamless, apps for mobile devices, open source software.

So, if you’re keen to try out a new social network, one that might give you a more authentic experience that you thought you’d get from Twitter but haven’t, give Mastodon a try. There’s much to like especially if you tried Twitter: 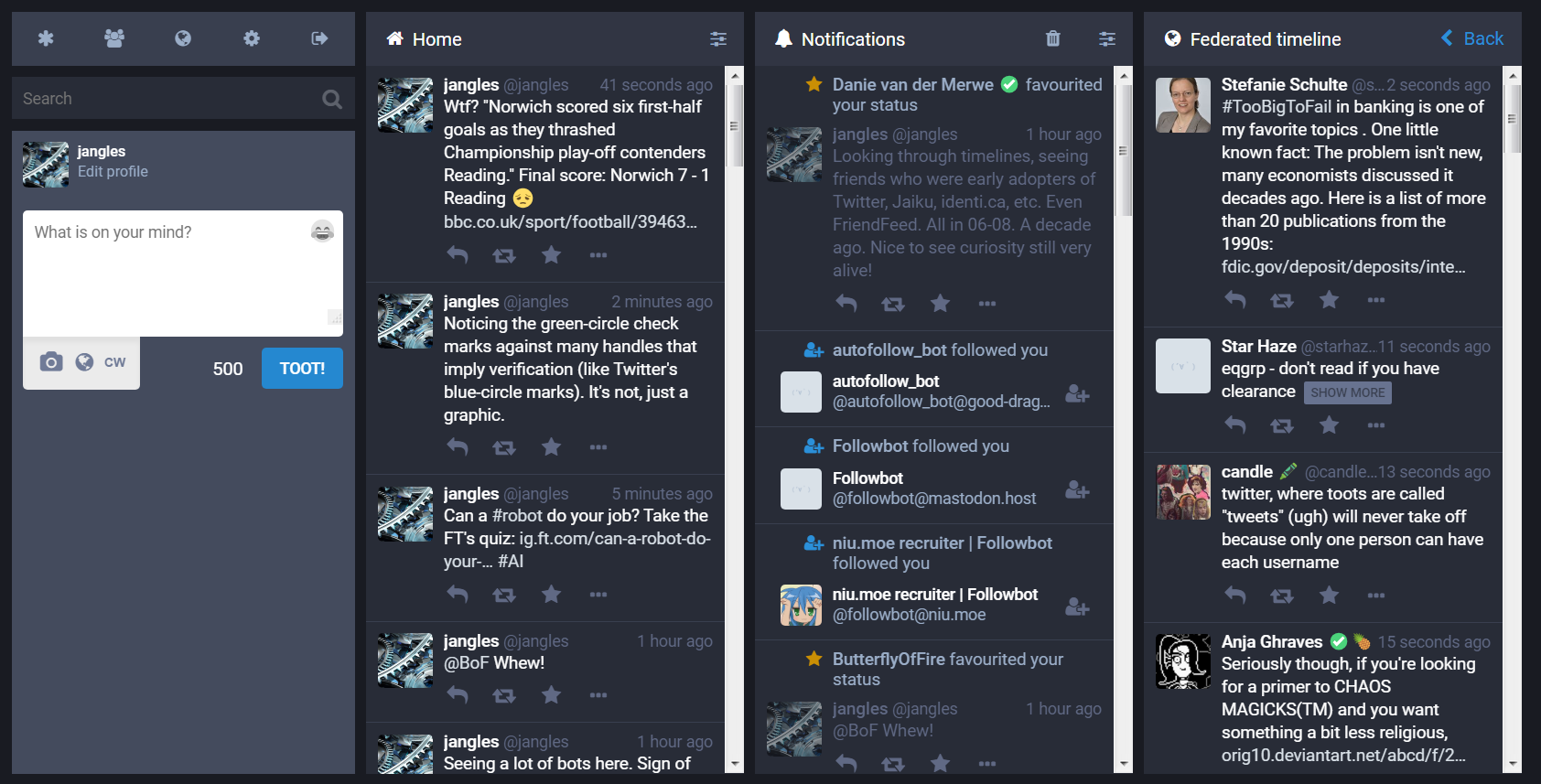 On the flip side, there’s a bit of a learning curve with things like figuring out how to find friends where the handle they use is configured to the instance on which they registered it (I’d expect this to get easier over time with, eg, user directories). You also need to get to grips with a whole new vocabulary – “instance,” “toot” and “boost,” for example.

There are also quite a few fake accounts – @realDonaldTrump, for instance, and @twitter – so you need to keep a keen eye on who you might connect with. Plus there’s no such thing as verified Mastodon accounts (like there are on Twitter) so any account you see with a green circle and checkmark next to a user name is not actually verified by anyone.

In addition, there’s the fact that the level of sophistication you might be accustomed to with Twitter – detailed analytics, ease of sharing content on Twitter from other sites, widespread mainstream adoption, broad recognition of what Twitter is – just isn’t there yet on Mastodon.

Perspective: Mastodon has 120,000 accounts (probably many more if you check now), but Twitter has over 300 million monthly users.

And there’s the big reality that this is a start-up environment where things will change a lot and can go wrong and do so frequently (remember Twitter’s early days).

Still, I find such organized chaos and a Wild West feel are part of its appeal as users help shape how this embryonic federated social network evolves and develops.

The bottom line: a big appeal to many people will be that Mastodon offers users privacy, a simple chronological timeline, and no advertising. Not like Twitter.

Will Mastodon take off, or will it be as spectacular and short-lived as Icarus? It’s definitely anyone’s guess.

So I suggest you experiment, join in, get to know Mastodon. Just don’t expect much polish for now. Maybe that’s how you’ll like it.