In the aftermath of the terrible tragedy in Newtown, Connecticut, USA, on December 14 that saw 20 kids aged six and seven shot to death along with six adults, much talk has focused on re-opening the American debate on gun control.

An image I’ve seen posted by many people on social networking sites like Facebook and Google+ is this one that contrasts the numbers of people killed by handguns in certain countries compared to the United States. 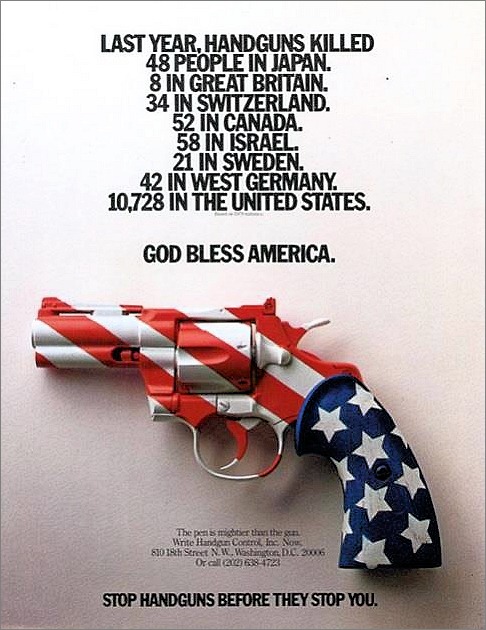 I saw this one in a post by Virgin founder Richard Branson.

The words say this:

There’s no date nor citations of a source or sources for the statistics. Yet the image is popping up all over the social web.

As for a date, there is a strong clue in the image itself with reference to the country ‘West Germany.’ As that country become simply ‘Germany’ after it and East Germany were unified in 1990 following the collapse of communism in 1989, it’s a safe bet to say the image and the statistics are therefore at least 22 years old.

But does that really matter when the point of the image in current use seems to be that of highlighting the shocking chasm between the numbers of deaths brought about by the use of handguns in the US compared to in the other countries mentioned, rather than the actual numbers themselves?

The small wording in the image beneath the stylized handgun suggests it to be the work of Handgun Control Inc., a lobbying organization that evolved in 2001 into the Brady Campaign to Prevent Gun Violence (the Wikipedia entry has detailed information).

It’s an imaginative image, clearly designed as a printed poster. It makes the powerful point of ‘the US versus the rest.’

All well and good, perhaps. Yet a worrying aspect to me is the ease with which everyone tosses around such imagery and metrics, amplified and repeated by anyone with an internet connection, so that it’s becoming hard to separate fact from fiction, genuine concern versus undisclosed partisanship.

What if the numbers or whatever are just wrong?

A similar picture – and clearly on a far more significant scale – concerns how the mainstream media reported on the identity of the shooter who took those children’s and adults’ lives in Newtown, getting it totally wrong at first, thus seeding the repetition of ‘falsehood reporting’ – unwittingly to be sure – that prompted emotionally-charged but ugly behaviour across the social web including death threats against an individual wrongly identified in the media as the culprit.

Yet I think all of this is simply reflective of the society landscape today.

Verification of fact before sharing your news with others used to be a pillar propping up the foundation of mainstream media authority, integrity and respect. The advent of social media and how anyone can report the news tossed that idea into the long grass in many respects.

There seems to be a sea change in how the mainstream media carries out fact checking, certainly in the US, instead taking part in a race to get the news out there before your competitor – which can mean the blogger down the road or the social networker a continent away who’s keeping an eye on what people are talking about online – whatever they’re saying – not just other mainstream media.

While analysis and debate on the media’s role (and responsibilities) over reporting the Newtown massacre goes on, I truly hope all of this – media reporting, 22-year-old images and statistics, repeated and amplified misinformation, the lot – contributes to not only a genuine debate about guns, society and where it all fits together but also action that would make it hard to imagine another Newtown taking place in America.

This is about far more than purely gun control, embracing as it does the behaviours of individuals and society as a whole.

Observing some of the opinions in my Facebook timeline from American friends, I see quite a bit of talk about the US constitution, the second amendment and the right to bear arms.

Indeed, as I commented in a Twitter discussion on Saturday morning, I get all that.

@JimConnolly I understand the right to bear arms argument, the Constitution, etc. But all I see is what happened in Newtown yesterday.

Yet all I see is what happened in Newtown, Connecticut, on Friday, not to mention the other shooting horrors of recent years.

Surely there is a will in America that leads to a way to solve this?