Winter certainly did arrive in many parts of the UK overnight on Thursday with thick snow blanketing much of the eastern and southern parts of England.

Friday December the 18th was a day of complete chaos on the roads, on the trains and in the air with motorways impassable â€“ I have first-hand experience of that on the M20 in an abortive drive to join a Eurotunnel Shuttle train to Calais â€“ airports closed and, overnight Friday/Saturday, Eurostar trains broken down in the Channel Tunnel stranding thousands of people for hours on end.

Itâ€™s the latter event that I find astounding in the way in which train operator Eurostar has handled the inevitable (and growing) public outrage about what actually happened in the tunnel on Friday night.

I saw Eurostar UK CEO Richard Brown being interviewed on BBC News on Saturday morning and I was impressed by his humility and genuineness in the apology he gave. Even better is the informal video on YouTube with a more personal-sounding apology as well as Brownâ€™s blog post.

Yet thatâ€™s not going to defuse the anger of those who were trapped on Friday night especially as lurid stories of the appalling experiences of those people emerge and make headlines in the mainstream media globally and get increasing attention in the online social space.

This is a full-blown crisis for Eurostar and its leadership, especially as now rail experts, politicians and pundits start to ask serious questions about the circumstances of Friday and Eurostarâ€™s handling of it all.

I would imagine that an organization like Eurostar has a crisis communication plan prepared and ready to execute at times like this. I wonder if they ever tested that plan beforehand. It doesnâ€™t look like it.

[Later] Watching the ITN News video, above, I was struck by the irony of that video on YouTube containing a Google text ad forâ€¦ Eurostar. 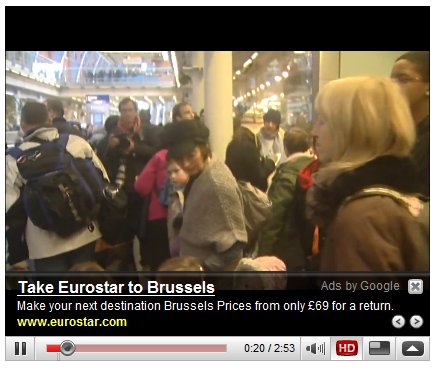 Not chosen by a human being but by an algorithm that looks for contextual relevance in the content. At least, I think thatâ€™s how it works.

Unfortunate, though, in this situation: rubs salt into Eurostarâ€™s wounds.